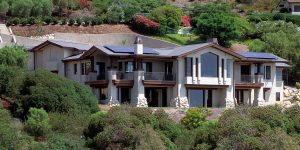 For the owner of this all-new home overlooking the Santa Barbara waterfront, finding the right architect was the easy part. “I was just looking through magazines and all the homes I liked happened to be Don Pedersen homes,” says Vickie Ideta. So she rang his office.

Ideta, who’s Asian American, told Pedersen that she was a big fan of the Asian influences on the American Craftsman architectural style. “Lots of natural wood. Streamlined features. Clean lines with a natural color palette,” the list goes on, she said. “I wasn’t looking for ostentatious detail so much as fine workmanship. That’s what I think of when I think of a Craftsman home.”

Ultimately, she added, “I wanted a house that was a modern look on a Craftsman, with the views taken into consideration. And because it’s in California, I wanted an inside-outside feel.”

With Ideta’s direction and wishlist committed to memory, Pedersen started drawing. The design evolved as the drawings took shape, “going through four or five iterations,” she remembers, to get the house just right on paper to avoid costly redesigns down the line. “I wasn’t too keen on the whole change-order idea,” Ideta says.

With completed plans in hand, Pedersen recommended Ideta start interviewing contractors. During that process, Giffin & Crane jumped out above the rest. Then came the hard part.

Situated on a steep hillside with no driveway, the tough-to-reach parcel was also composed of Santa Barbara’s dreaded expansive soil, which is prone to swelling and shrinking as its water content changes throughout the seasons. As expansive soil moves, it threatens to dislodge a home from its foundation or send a crack through the ceiling. 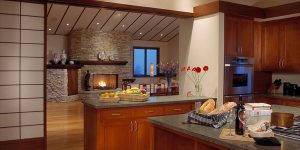 Per Ideta’s desires, exterior stonework made its way inside, with matching fireplace facades (pictured, above) and an aggregate concrete floor downstairs for the pool table and guest rooms. Upstairs, there’s the master bedroom, kitchen, and great room, all with those optimized views (pictured, below). From the stonework to the custom cabinetry by Architectural Millwork, Ideta paid attention to every detail and was open to feedback from the build crew. 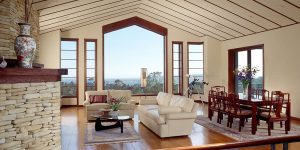 “One of the things I liked about working with Giffin & Crane is that they brought in some of the best people,” she remembers. “They were true craftsmen who really added to the home with their ideas.”

All said, it’s approximately 4,200 square feet, with four bedrooms and four-and-a-half baths, and everything she had hoped for, she says. “Building a house was one of those bucket list things I always wanted to do.”