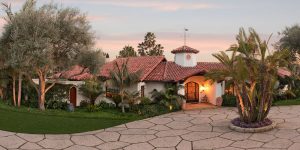 Britt Jewett’s father was an architect, and from him he learned to draw and define his own style at a young age. “I was aware that I possessed an artistic gift,” Jewett remembers. “It has been the principal lens through which I see myself and the world. As an architect I approach my profession as an artist first.”

After formal schooling at Ohio State, Jewett headed to California, where, after a joyful stint with Charles Moore, he refined his understanding of architectural space while working with Barry Berkus on everything from residential interiors to urban planning. In Santa Barbara, Jewett oversaw the restoration of the Santa Barbara County Courthouse Hall of Records. He also began exploring design themes outside traditional architecture, such as set design and installations for the Santa Barbara International Film Festival.

To expand his skill set and flexibility, he opened Studio 7, which he describes as “a collaborative design studio to afford me the freedom to work on a variety of projects not supported in a traditional office structure. The collaborative experience connects me with a wide range of artists and design professionals that inform and deepen my range of experience. My practice includes remodels (such as the modern Craftsman, pictured above) and new residences, specialty structures, architectural interiors, furniture, and lighting.”

Jewett: My father was an amusement park architect. I learned from him to appreciate the feeling of moving through a physical environment; my work hasn’t been nearly as animated though.

Two of my college professors were fellows of Frank Lloyd Wright; they lead a two-day tour of significant works throughout the Midwest. It was rare and intimate.

The courthouse is my favorite building, not for its obvious decorative style but for its success as social and community resource.

Where do you find inspiration outside of architecture?

I like the scale of buildings. Balancing the form outside and experience inside is a rewarding challenge.

I don’t like doing billing. Donations haven’t been enough, though, so it is a necessary evil for me.

Go back and pick another profession.

I would be a sculptor, producing environmental or public art.

I am being towed up the first hill of a roller coaster.

I am laughing in a room of laughter.

Spending more than a day being wrong terrifies me.

I love my space at the Meridian Studios, and I do my best to keep it feeling extravagant.

No one would argue that I could be better organized.

I continue to work on overcoming the fear of dreaming big.

Lifestyle is more important to me than physical possessions.

I don’t know. I am fascinated by Martha Stewart’s journey, though.

I’d rather not start an argument.

The Dude, and I don’t have a close second.

People that operate outside the box but still have a balanced life.

I’m not honest with myself about how complicated I make things.

Perseverance. I don’t give up easily.

“Let’s go backward for a minute.”

I worked with a Swiss architect that would close each meeting with the phrase “as always we will do our best” in his Swiss accent. It makes me smile. 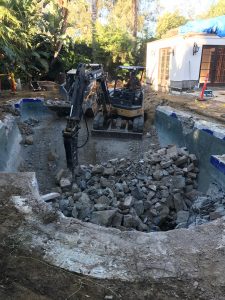 Sure, countless clients have taken comfort in the fact that Mac Brown Excavating has been around since the early ‘80s. They can also feel good about supporting a business forged and maintained by a long-time Santa Barbara farming family. But what it really comes down to is that Brown, his stepson Mike Isaac, and their dirt-moving crew of 22 have their clients’ health and longevity in mind each time they fire up a piece of heavy machinery. Just read the company’s mission statement: “Ask any doctor and they will all tell you that sleep is imperative in order to live a happy and healthy life. We at Mac Brown Excavating take every precaution to make sure the job is done right and in a timely manner so you can sleep better at night.”

But doing a good job ahead of schedule is just part of reason why Giffin & Crane calls on Mac Brown with regularity, says Isaac, who entered the company full-time around 2001 after growing up in the trade.. “We just try to offer everything we can. [General contractors] really enjoy having one subcontractor cover as much as possible.”

In that respect, Mac Brown has grown its offerings considerably since those early days of helping fellow farmers dig drainage ditches. There’s plenty of grading, of course, from flat driveways to hillside removal, plus storm drains, utility trenches, and various feats of demolition, such as making swimming pools disappear (pictured above). “We do anything and everything that takes a tractor,” Isaac says.

Mac Brown first worked with Giffin & Crane about 15 years back, razing an old house to make way for a mansion in Montecito’s Cima del Mundo gated community. Since then, as Mac Brown further expanded into custom residential construction jobs, they’ve put each other on speed dial. “Giffin & Crane is one of our best customers,” says Isaac, who grew up in Carpinteria, where the company is headquartered with 40 pieces of heavy machinery. “We work well together. Once you’ve fostered that relationship over the years, there’s no surprises on the job site.”

In fact, the only job-site surprise of late has been a winter’s worth of heavy storms unlike anything the region has seen through five years of historic drought. But with a hustle gleaned from the family business, Isaac and his crew managed to stack up longer work hours into calm-weather windows without fumbling a single job, he said. Hey, whatever it takes to help everyone sleep better at night.