Mid-Century Sea Ranch: Rebuild with Nod to Past

The four-acre hilltop belonging to Barbara and Greg Siemons (pictured, below) enjoys a broad view across the greater Hope Ranch neighborhood, yet blends into the surrounding land and sky. Avocado, apple, stone fruit and citrus greenery fill the property’s gently rolling contours. An expanse of drought-tolerant California grasses thrive along an unirrigated western slope. And the property’s centerpiece—a three-bedroom, two-and-a-half bath single-story home—draws the eye without stealing the spotlight. 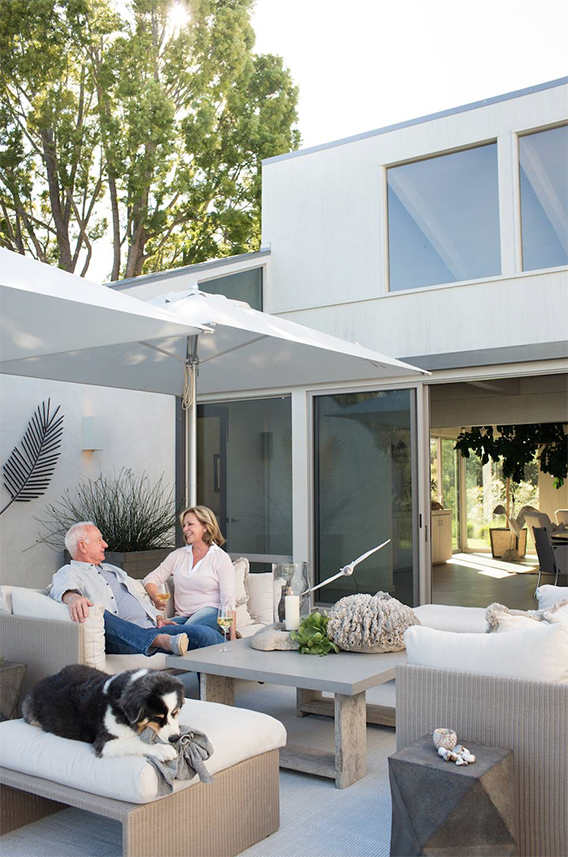 Conceived in the 1960s by an architect with Northern California sensibilities, the Siemons home—which Barbara describes as “mid-century sea ranch”—is a marvel of single-grain old-growth redwood fastened with copper nails. But after 50 years of seaside existence, it needed a comprehensive remodel. That doesn’t mean its distinctive character was put out to pasture. Far from it.

Maintaining the original footprint at approximately 3,000 square feet, the Siemons opened up parts of the interior, brought in more natural light through five new skylights, replaced about half of the redwood walls with a smooth coat of plaster and finished it to match the grayed patina of weathered driftwood. Most of the removed redwood planking was repurposed as baseboard and cabinetry. Underfoot, composite concrete floors complement the new walls, windows and doors. 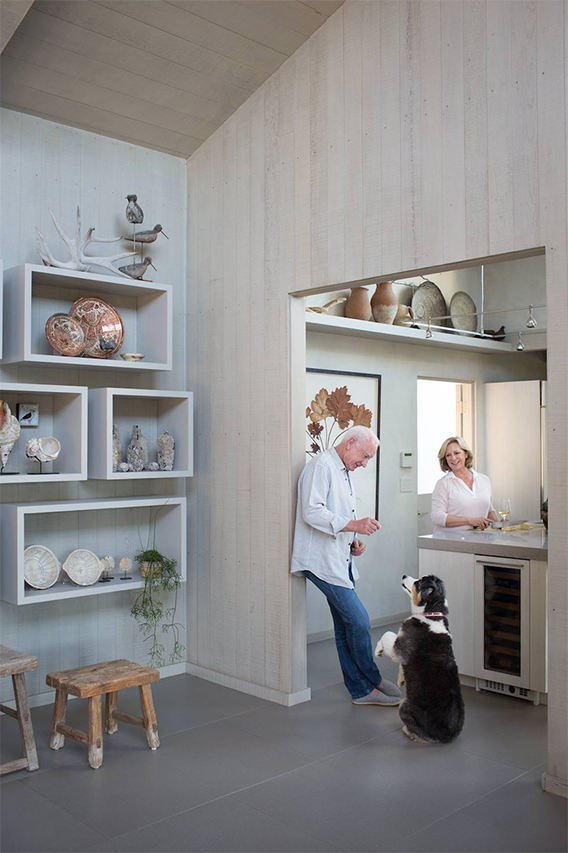 The open, relaxing mood of the interior extends outside, as well. Certain walls carry original redwood siding and others have been renewed with highly finished stucco, all of it in concert with the warm grays of a summer fog. The Siemonses also extended the front-yard deck to form an exterior wrap-around connection between shared living spaces and adjacent bedrooms.

“Here’s where I really had fun with it,” says Barbara about the master bath, which sports his-and-hers sinks, a large walk-in closet, separate shower and tub, private toilet and a sliding glass door to a deck and outdoor shower surrounded by hedge of physocarpus.

“We clicked with Giffin & Crane immediately,” she says. “They understood that we wanted to go modern, but not too modern.”

‪“As we opened it up, there were a lot of surprises,” she adds with a laugh. Before the Siemonses purchased it in 2012, the house had stood empty for eight years. “It was a bit of a Pandora’s Box, but Giffin & Crane was excellent at troubleshooting and moving on the best solutions.” ‬‬‬‬