Landscape Architecture: Coursing Through His Veins

As a landscape architect specializing in the art and science of designing outdoor spaces for discerning clientele, it was only a matter of time before Leland Walmsley and his team at everGREEN Landscape Architects crossed paths with Giffin & Crane. That encounter occurred in 2008 on a comprehensive remodel in Montecito. Since then, they’ve worked together on half a dozen projects, from a Tuscan farmhouse residential build to a remodel of the Ojai Valley Inn & Spa. 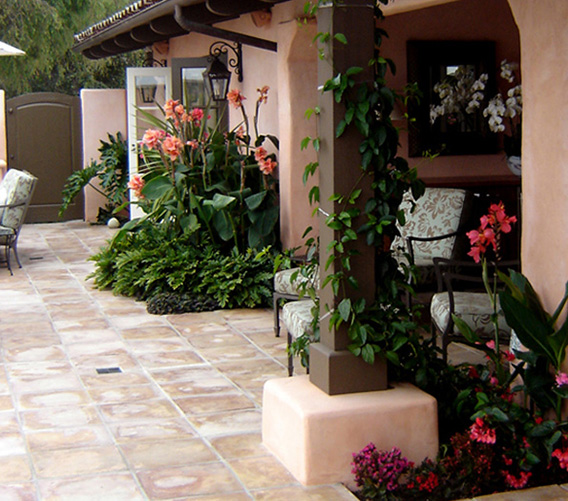 Like Giffin & Crane, Walmsley’s reputation rests with high-end endeavors, yet he’s not exclusive. He’ll take on 300 square feet as enthusiastically as 300 acres, simply because it’s what he loves to do—and it’s in his blood.

Nearly a century ago, his grandmother, Margaret Sears, started practicing landscape architecture at Florence Yoch & Associates in Pasadena. In 1923, she helped create the renowned Italianate garden at the Il Brolino estate in Montecito. She also designed the Ojai Valley Inn’s original gardens and worked on exterior set designs for Gone with the Wind. And these days, in a drought-stricken Southern California, original practices come back into play. 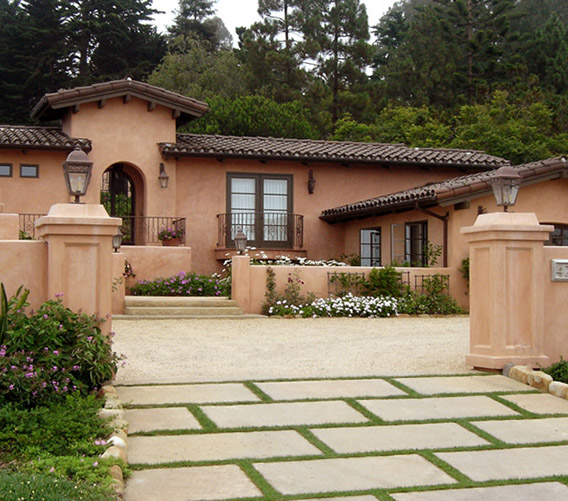 “A true estate garden really gets by on very little,” Walmsley says. “My family and I have always practiced cutting-edge, organic, environmentally responsible and green design, while others are just now scrambling to catch up. Many of my early clients don’t even realize their gardens are eco-sensitive, but are enjoying all the benefits: reduced installation and maintenance costs and a healthier environment to work, live and play in.”

Born and raised in Pasadena, Walmsley (pictured, below) studied film, fine arts and marine biology at UCSB in the early and mid-’80s before graduating from the USC School of Cinema-Television in 1988. For years while trying to figure out how to get back to Santa Barbara, he worked in Hollywood production design, he says, before refocusing on landscape design and architecture. He moved back to town in 2001, earned a Graduate Certificate for Landscape Architecture from UCLA a year later, and in 2004 he launched everGREEN. In 2007, he distinguished himself as the first certified LEED AP landscape architect in Santa Barbara and Ventura counties. 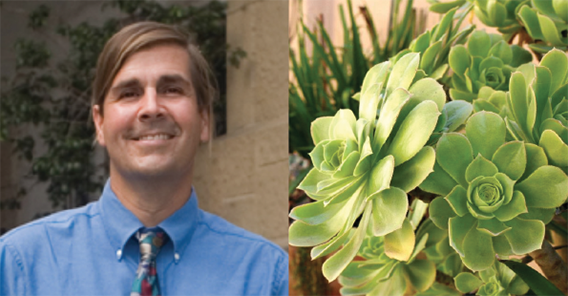 That LEED (Leadership in Energy and Environmental Design) certification requires that all the heavy hitters of a construction project—general contractor, architect, landscape architect, interior designer and a variety of engineers, among others—get together early on to carry out the U.S. Green Building Code’s mandate of resource efficiency and environmental responsibility.

“We have a very good working relationship with Giffin & Crane in that respect,” says Walmsley. “When you get a contractor like Giffin & Crane on board from the outset, they can engineer-value the project more precisely so that clients don’t get sticker shock.”

(By Keith Hamm, with photos courtesy of everGreen) 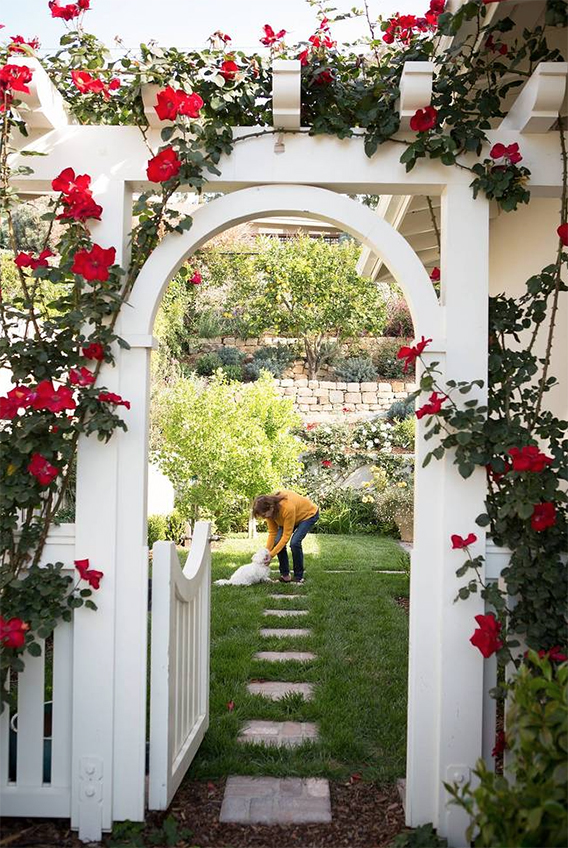 When Lillian Cross’s husband, Dave, passed away a few years back, she purchased a Mesa home that he had previously discovered while walking the dog. A modest 1,350 square feet, with two bedrooms and two bathrooms, the house was a good size for Lillian, suddenly living alone and taking over the award-winning industrial lighting business Dave had established.

As with any new home, she needed to make it her own. After fielding a handful of remodel bids she thought were overpriced, she called Giffin & Crane on her daughter’s recommendation that “if you’re going to do something like this, do it correctly with a company that has a reputation for quality and service.”

“When I initially called, I thought Giffin & Crane would tell me the job was too small for them because they were known for building big, Montecito-type homes,” remembers Lillian (pictured, below). “But there was no hesitation on their part, and they demonstrated over and over again that my little house was important to them.”

The 6,500-square-foot lot sits on a hillside with views to Santa Cruz Island, but the existing exterior staircases were steep and narrow, tough for Lillian to safely navigate. With Bruce Giffin’s guidance, crews built new, gently sloping staircases, and retained the hillside with sandstone walls and appropriate landscaping. The backyard’s new centerpiece is an airy portico with comfortable furnishings and inconspicuous heaters overhead. 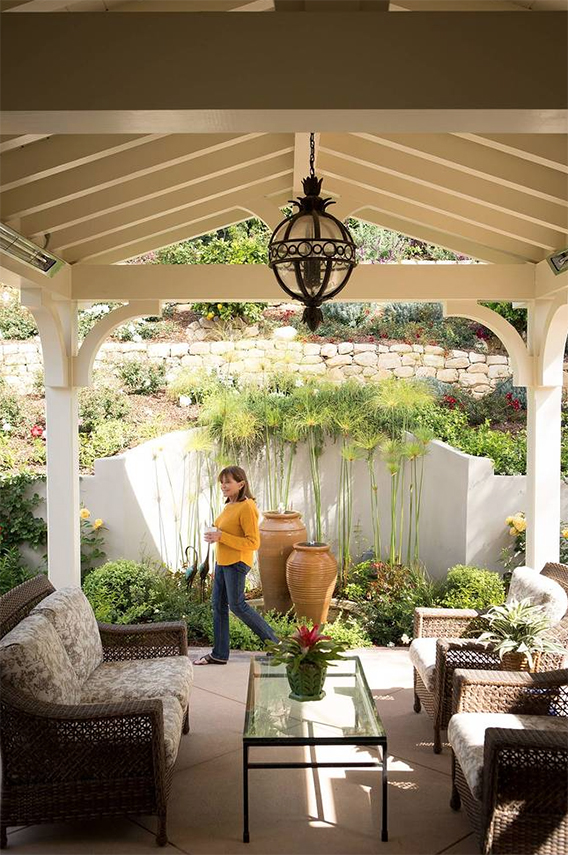 “It’s my little Shangri-La,” says Lillian, a place to sip something warm in the morning and to unwind at day’s end.

As the work outside was nearing completion, Lillian contemplated an interior overhaul, but didn’t know where to start. “Bruce’s infinite patience convinced me to pull the trigger on remodeling the inside,” she says.

The original railroad kitchen felt very claustrophobic, she remembers. “Bruce just opened it up so there could be social interactions between the kitchen and dining room and living room,” which comes in handy when her children and grandchildren come over. 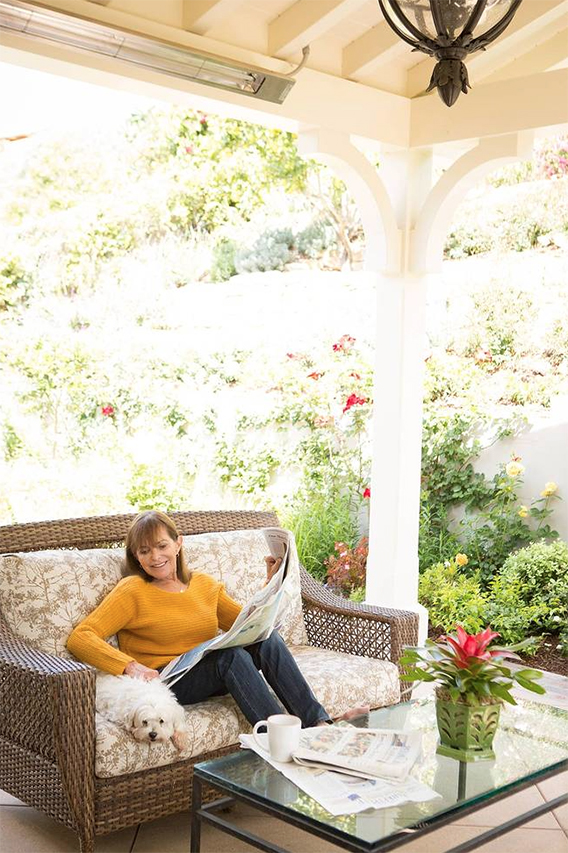 Other updated features include refinished oak flooring throughout, a business office where a small bedroom once was, a cozy TV room — with an entire wall of books — leading out to that portico, a Japanese soaking tub that fits perfectly in the guest bathroom, and widened doorways complementing the newly opened floor plan.

Giffin & Crane tailored all of it to Lillian’s taste and potential needs down the road.

“I’m 74 years old, and I’m planning ahead to be able to move about freely inside and outside,” she says. “The best thing about working with Giffin & Crane was working with Bruce [pictured with Lillian, below]. I felt so much a part of the process. It was a wonderful experience.” 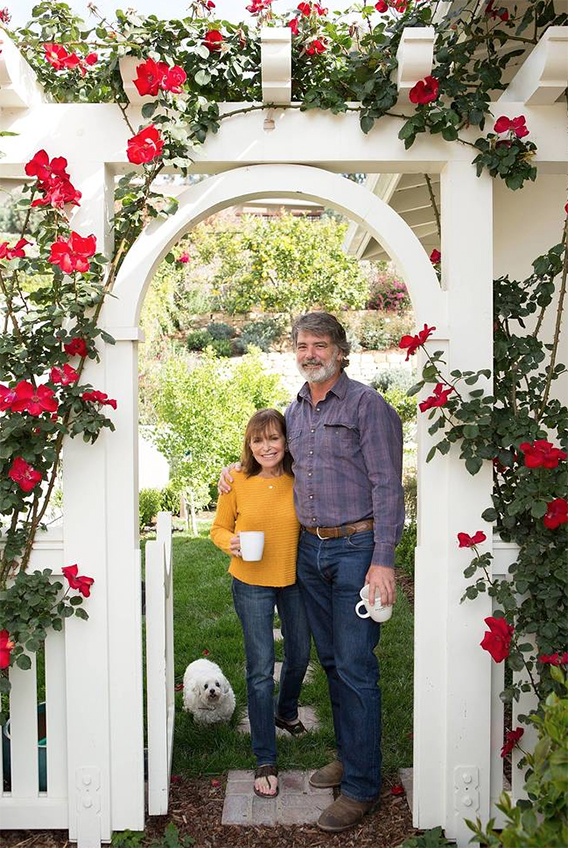 (By Keith Hamm, with photos by Coral Zumwalt)