Built in 2011, this 4,200-square-foot home (pictured, above) had plenty of attractive ingredients, such as steel-reinforced framing, vaulted ceilings, and a sensible floor plan. Outside, a wooded ambiance invited quiet privacy, all within walking distance of Montecito shops and restaurants. Purchased in 2012 by a retired couple—who prefer a bit of anonymity—the house would serve as a comfortable homebase between travels and a grand gathering spot when their grown children headed home for the holidays. They wanted it to be perfect. And for that, it would need a transformative remodel.

On a recommendation, they called Giffin & Crane. We recommended architectural designer Jason Grant. Also on board was Wendy Weiner, the interior designer of their previous home. The design-build team was set.

Described by the homeowners as a ghastly mishmash of design features, the home’s main living area—a wide and vaulted space linking the kitchen to a dining area to the living room and fireplace—originally showcased heavy stone pillars, archways clashing with archways, and bloated ceiling fans. All in all, there was far too much busy detail, which would distract from the homeowners’ desire to build a nice backdrop for all the furniture arriving from their previous home. Their old place was nearly twice as big, but the goal wasn’t to downsize so much as “right-size” their post-career lives into a final home with all their favorite pieces.

Meeting every Thursday, the team decided not to rush the planning process. Better to get the concepts just right—and get them all down on paper, with cost and timeline accounted for—before launching the project. And after a year in planning and another year in process, their patience paid off.

Giffin & Crane builders—led by project manager Dana Anderson—calmed the busy living spaces by eliminating superfluous arches, lifting ceilings, and moving those bulky stone pillars outside where they belong. A linen closet off the kitchen became a bar. Boring cabinetry found an elegantly antique look with a bit of creative refinishing. And the three-car attached garage became a family room, office, and library, as crews built a new 800-square-foot garage on the other side of the driveway. Other highlights include a Napoleon direct-vent gas fireplace, custom light fixtures by Merv Newton, and all-new wood floors.

With the finishing touches in 2015—including a French courtyard out the back, with a burbling fountain and a hidden owl box—it’s the sort of home that makes its owners say, “We’re done moving.” 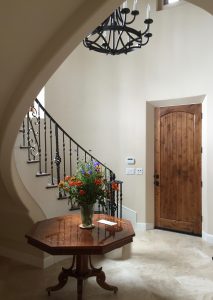 (By Keith Hamm, with courtesy photos.)